skip to main | skip to sidebar

Lines of movement - the origin and intent of the concept

In 1998 I released a wide range of original, innovate training concepts developed during the prior 18 years of coaching, based on extensive personal professional experiences training large numbers of elite athletes. Many of these methods have gone on to shape how the world trains.

I have summarized many of these in the on-line course ‘KSI Level 1 – Legacy’, which was released for the first time about two years ago.

For example, I began my first public extensive teaching of the concept of lines of movement in 1998 with the following statement:

That’s a concept I’m sure you’ll have never heard before because this is the first time I have spoken about it. (1)

The following shows a breakdown of the body into major muscle groups/lines of movement, and then into examples of exercises. It is what I call ‘the family trees of exercise’. Use this to assess balance in your exercise selection…. (2)

Now I am going to show you how I break the muscle groups up: (3)

These concepts are now used throughout the world. Ethical and well read authors and presenters reference and credit the origin.

Initially these concepts were referenced and credited accurately. For example, this was said about one concept, a concept I called ‘lines of movement’:

Before Ian popped up from Down Under, most coaches said to train all the muscles of the legs in one session and use the most efficient exercises. That means squatting and deadlifting on the same day. Problem — As effective as these big mass builders are, they’re also very fatiguing and really sap your energy levels. If you start your workout with squats, your deadlifts will suffer and vice versa.…

To help you understand how to divide and balance out your training, Ian came up with a list of major muscle groups that reflects their function:

Ian has a few other categories for abs, lower back, calves, and arms, but the ones above are main muscle groups you need to worry about. Based on this list, you need to be doing vertical as well as horizontal pushing and you need to be doing the same number of sets for each and keep the rep ranges equal where appropriate.

Let me give you an example of how this list can help you. Before Ian provided this simple list, I did almost nothing but chin-up variations for back training. Sure, I did rows occasionally, but not very often as compared to chins. This was an imbalance. Now I do just as many sets of horizontal pulling as I do vertical pulling and it’s really helped my back development....(4)

To reinforce this point, here’s a program published in a popular men’s magazine in the US in 1997, about six months prior to the 1998 release of many of my concepts including lines of movement.

You will note the absence of many concepts that I released in 1998 in this program. e.g. lines of movement, uni-lateral bodwyweight exercises, abs first, control drills, pre-training stretching etc etc.

However in 2005 two ‘books’ were ‘published’ by two different and ‘effective’(6)  marketers, both of which ‘publications’ contained a wide range of my original ideas in the absence of referencing or credits (7). For example, both of these publications taught and used the concept of lines of movement without any referencing or credits (8). Both ‘authors’ were in seminars where I taught this concept in or around 1999 and or ordered my books and videos where I taught these as original concepts (9). So I conclude they knew the origin and simply choose to ignore it.

2005 formed a watershed year for my concepts, and since then I have seen a number of additional publications where the authors and or publishers have made no attempt to provide accurate credits or referencing, or at best a diluted one.

I believe that well-researched writers and teachers with integrity will apply acceptable professional guidelines when using the original works of others. Those who lack these two qualities don’t.
I watched this direction with interest. I raised these matters with a number of private organizations, professional bodies and publishers. Over time it appeared that values other than honest writings, ethical referencing and legally compliant copyright respect were not high on the priorities of these entities.

To the one particular staunch defender of this plagiarism – I share my belief that the willingness of these organizations to continue to associate with and endorse these individuals is not a reflection of the right of these individuals to carte blanche use of my intellectual property in the absence of professionally accepted standards of referencing and crediting – rather is it a reflection of the values of these entities, the implications of which will be judged by history.

I understand there is a market segment who belief that it doesn’t matter where the information comes from, as long as they get it. I respect their right to form any opinion they choose. However let me share mine position – those who lack the trait of honesty and long term application that would result in developing their own experiences to teach and sell do not understand the concepts, do no teach them accurately, have not used them long term in true practical application, and when either a new trend comes along or they feel it’s time to dump these concepts, will do so. Their motive to create short term personal and commercial gain by being the one to bring ‘new concepts’ to the market - I suggest this serves only themselves.

I also recognize that there may be some pain involved in me putting my hand up to correct this information. Those who entered to industry post 2000 and were first exposed to the un-referenced diluted versions may struggle with the idea that their source failed to teach the full picture. Some of the pain may even be deflected back to us.

None of this will change what the direction we are taking – to accurately and honestly teach my original concepts. To regain the legacy.

Despite the widespread teaching of my concepts by ‘authors’ such as this, or perhaps because of, the true intent and power of my concepts has not been put to use. The world is no better off. Sure a handful of new entrants to our industry have been given an impressive collection of information – but nothing really has changed. The reasons I created these concepts – to produce superior performances and reduced injuries – has not occurred.

This is disappointing but not totally surprising. I believe you will not serve humanity in the absence of a true deserve to serve. When the motive is to gain credit for new idea and short term cash flow, neither of these motives form what I call true intent, and therefore the original intent of the concepts falls short of their potential.

To address these issues, a few years ago I decided to collate my concepts and provide a summary of them in a way that included the history of why and how I developed them, and the most extensive explanation available as to how to use them. I called this the ‘KSI Level 1 – Legacy Course’. This is the first step in balancing the misinformation for self-serving purposes that has denied the world the opportunity to fully benefit from my original, innovative training concepts – concepts shaped, tested and proven by decades of practical application.

For the last two years this course has been available and undergone a long testing period. It began with a trial group that were virtually given the course, and even now, towards the end of the testing period, the price of the Legacy Course is only twice what many paid in the mid-2000’s for a document that was in essence a very poor copy of my How to Write / Get Buffed! TM and How to Teach books.

Perhaps over time, as more people gain access to the original content rather than the diluted plagiarized and/or unreferenced versions, the power of these concepts will come closer to fulfilling their potential in serving the world in optimizing performance and reducing injury.

Recently I was giving a lecture at a university in the US on the subject of ‘lines of movement’. I was given three hours to teach this concept. As I taught, it struck me that the content I was sharing would be so powerful for the world to gain an insight into where concepts such as this came from, why they were created, and their original and true intent in how to apply them.

To this effect, I have decided to make this three part seminar – Lines of Movement - available for order. You can order and watch this electronically delivered video by clicking on this link.

For Email Newsletters you can trust

After commencing his professional journey in 1980, Ian's motivation for studying physical preparation was simple - to find out the optimal way to train. As a result of this clear focus, Ian attracted athletes seeking his services even prior to graduating.

Over the ensuing decades Ian trained athletes in over 20 different sports at the elite level in over 10 different countries, in Summer & Winter Olympics, and Commonwealth Games over five Olympic cycles, in World Championships and World Cups in various sports. Through these experiences Ian learnt why athletes fail, and what is needed to succeed.

As a coach educator Ian teaches his original, unique and highly successful methods primarily through the KSI Coach education program.

King Sports International, Inc., founded in 1986 by Ian King, has been servicing athletes and coaches professionally for nearly 25 years - making it one of the oldest continuously operating companies in the world dedicated to athlete preparation and coach education. 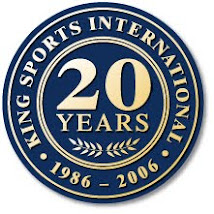 Over two decades of teaching the world how to train!